FREE - On the App Store 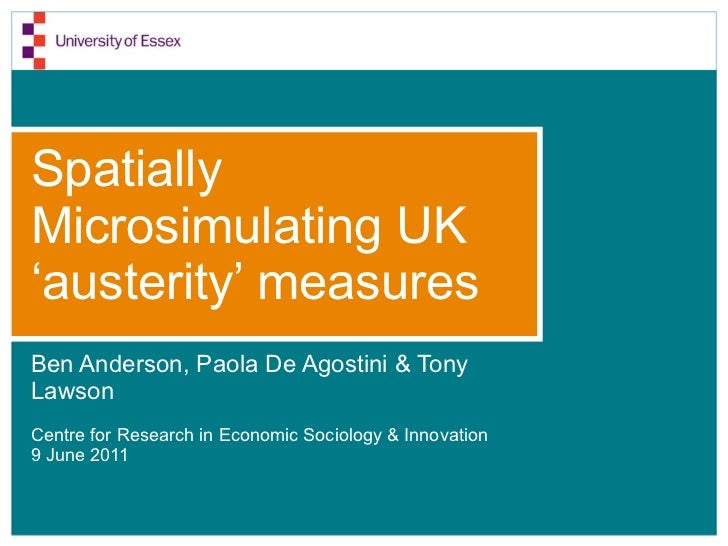 Estimating the small area effects of austerity measures in the UK

Governments across Europe are starting to implement a range of cost-cutting and income- generating programmes in order to re-balance their fiscal budgets following substantial investments in stabilising domestic financial institutions in 2008 and 2009. One method of doing this has been to increase tax rates such as the increase in VAT in the UK from 17.5% to 20% from January 1st 2011. In this paper we explore the different spatial impact of this VAT rise on household expenditure on public and private transport and communication technology from 2006 to 2016. We do this by combining three elements: an agent-based dynamic population microsimulation model that produces projected snapshots of the UK population in 2006, 2011 and 2016; an expenditure system model based on the familiar Quadratic Almost Ideal Demand System approach; and synthetic small area census tables produced by projecting historical UK census data. Taken together these elements provide a toolkit for assessing the potential spatial impact of rising taxes or prices (or both) and we use them to compare small area projections of household expenditure under two scenarios. The first is a 'no intervention' scenario where prices and income align to UK government inflation forecasts and the second is a one-off non-reversed 2.5% increase in VAT on goods and services rated at 17.5% on 1st January 2011. We present results for different areas (rural vs urban/deprived vs affluent) and for different income groups within them and discuss the potential implications for the telecommunications industry and for the usage of public and private transport.

Uploaded via SlideShare as Microsoft PowerPoint